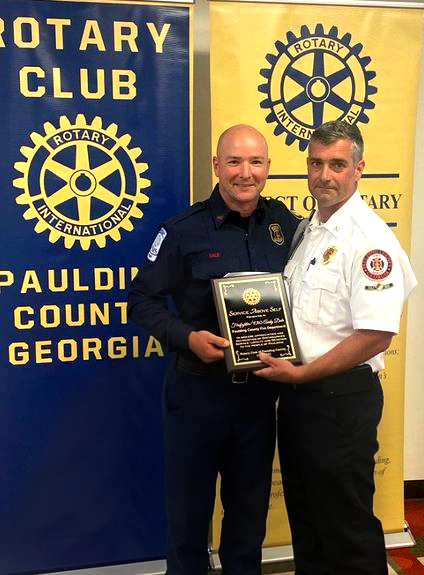 FAO Andy Dale Named Firefighter of the Year at a ceremony on Tuesday, May 2nd, the Paulding County Rotary Club honored Fire Apparatus Operator (FAO), Andy Dale, with its 2022 Firefighter of the Year Award. In 2007, Dale began his fire service career with the City of Rome. In March 2013, he transferred to Paulding County Fire & Rescue where he quickly earned a reputation as a skilled Firefighter, a great leader, and a friend to many. He currently serves at Station 2 in Hiram and operates Truck 2 which is the County’s largest and most advanced fire suppression vehicle.
During the awards, ceremony Division Chief Kevin Hart said, “Andy Dale proves his love and commitment to the citizens of Paulding County every day. He has great compassion for his friends and for all of the patients he sees on the job. He is extremely dedicated to his occupation as a Firefighter and is well respected at all levels throughout the department. Congratulations to Andy Dale who is very deserving of this award.” Pictured below is FAO Andy Dale (left) along with Division Chief Kevin Hart (right).